The Geo Group is now conducting works the second stage of its Katowice housing project. The second building of Atrium Geo is being built on Rolna St. The investment is scheduled for delivery this year.

The first building of the housing scheme was put at inhabitants disposal in the turn of 2011 and 2012. There are 60 apartments in the five-storey building. The second twin-facility was already topped-out and is now being finished with windows, brick walls and external facing.

Geo offers 2, 3 and 4-room apartments in the second building starting from 47 to 89 sq. meters. Prices start at PLN 3 990 per one square meter. The buildings have lifts that lead to every residential floor and the underground garage. The apartments on the ground floor are featured by cosy yards, several apartments on the upper floor have terraces. All other apartments have balconies.

Atrium Geo is the only one housing development of Geo Grupa in Katowice. The company is also involved in the medical project called Geo Medical, which is being erected in the junction of Wita Stwosza and Ceglana streets. 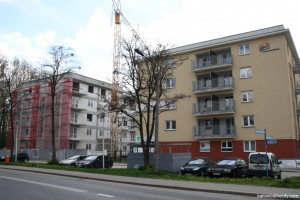